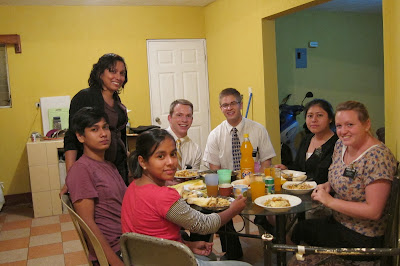 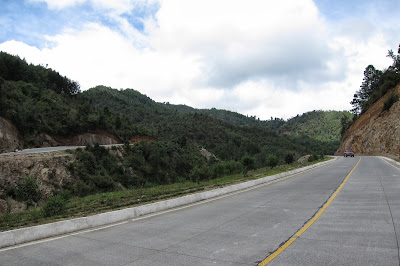 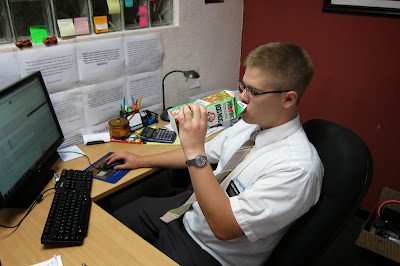 I fully plan on finishing this half gallon before I'm done emailing.

How are you? I felt that this week also flew by, I was really busy so that was nice. How crazy is it that this coming week is Thanksgiving? The girls are so lucky that they have the whole week off. How did the schools pull that one off, I swear that never had happened when I was in school. I don't think we will be doing anything that exciting on Thursday. Usually the office elders have a dinner at the mission home, but this year they said we weren't going to do anything since there are going to be multi zone conferences throughout the mission this week. Kind of a bummer. I don't have enough money to pay a member to buy the stuff this year either. Looks like it will be a beans and eggs Thanksgiving dinner. Not a big deal though. We are looking into seeing if we can buy a pumpkin pie from somewhere this year, that's about as good as it will get.

This week was crazy. On Wednesday there was an Elder who had hurt his foot and President asked that we go and pick him up in the mission truck so he could make it to some doctor appointments. So Elder Marriott and I woke up early and the morning and drove up to get him. He was in this area called Ixtahuacán. It is the farthest zone in the mission, its like an hour and a half past where Huehue is, so its pretty far. Its right on the Mexico border. But we left here at about 5 in the morning and did a little road tripping. The area is way up in the mountains and it is crazy hot there. I got out of the car and it was around 1030 in the morning and I felt like I had just stepped into an oven. The Elders there were telling us that in this area the people do not let the police enter. They live what they refer to as ¨mayan law¨. They still live the laws of the country and all, but they do not let the police in to enforce it. If someone breaks the law they publicly whip them, and if its serious enough of a crime, they either burn them or lynch them. I had heard of that happening in other places here in the mission, but still, its pretty crazy. If the police try and enter there is only one road to get there, and they roll big boulders onto the road and block it off. Kind of an extreme example of the preservation of the culture. And yesterday I had to go to the other end of the mission, in Quiche this place called Joyabaj. They had two pairs of missionaries there and took one of the companion ships out, so we had to go and get all the stuff out of the house before the next month. Also a ton of driving. Elder Marriott had rolled his ankle really bad a few days ago so he just has been hobbling around, he cant really drive, and we are the only two in the office who have valid drivers licences, so I got to do all the driving. It was actually really awesome though. Joyabaj is really close to the capital, and we get to drive on the really really nice highway when we go to Quiche. Seriously it is the only highway in the whole country that doesn't have potholes every two seconds, and there are also no speed bumps. I call it the Guatobahn because you can actually get driving more than fifty miles an hour. Since the roads are so small here and the police are so ineffective, there are no speed limits here. Seriously they are not even posted on the highways or anything, but the roads are so terrible that it doesn't even matter, you cant even drive fast. But the Guatobahn is nice. Feels like a real life highway. Plus there are no speed bumps. Just try and imagine driving on a highway with speed bumps.

Elder Funk´s replacement came in yesterday. Its Elder Vilca. So the kid I am trained is here in trio with us. Also Elder Marriott´s replacement came in yesterday too. Its a kid from Ogden and he is really cool too. Today I went with Elder Little, the AP that is in my group and goes home with me and we went and picked our suits up that we had bought. They are actually really really nice. I used the money on my card to pay for it, I had the cash to pay for it, but I just figured instead of having another atm fee I just used my card and I still have lots of spending cash for souvenirs. I still haven't bought anything though. We haven't really had time to go shop around. We will do it one of these days though I sure, there is still plenty of time. Everything is good here though, lots of work trying not to financial ruin a mission, hopefully I get out of here without doing too much damage. I love you guys and hope you have a great week.

Adam
Posted by Adam Morrow at 9:44 AM