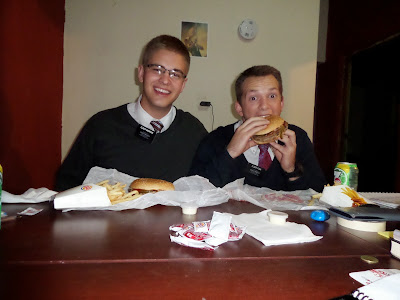 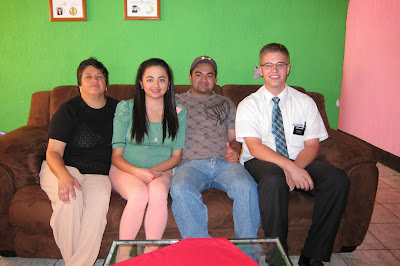 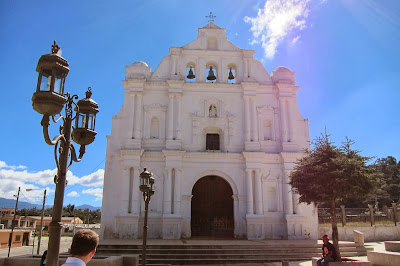 Happy late Thanksgiving! The pictures and everything looks awesome. Jack is either getting really big, or Dad is getting really small, or maybe a little of both. Things are really good here. It's surreal to have everything kind of winding down. It's hard not to think about it but I am trying my best to stay focused. We have been CRAZY busy these last couple weeks since this change is going to be shorter than usual. Normally they are six weeks, but since it is going to only be four weeks we have been running to get everything done. Since Elder Funk is going to be taking my place here too, I have been really busy trying to make sure he knows how to do everything. I had a lot more training (and probably a lot better of a trainer) than he is going to have, but hopefully we get it all figured out. Starting last week and going on throughout this week the mission is having all its multi-zone conferences and so that has also been really stressful. President asked me to translate for him this section in a book someone wrote on missionary work that just exists in English and that took me forever. I was really surprised though at how well my Spanish translating skills have come. I had all the latinos here in the office proofread it and I had almost no errors. Its was a couple of pages long too, I was really pleased. I have been thinking that at least I will do a Spanish minor and maybe even do the Spanish second major. BYU offers one that is specifically for double majors. I am sure it is really difficult but I think that would be really cool and good for a med school application. We have been running like crazy lately though. I am pretty tired.

Thanksgiving for us was pretty uneventful. We just did normal stuff all day and there was not turkey dinner. We ordered some pumpkin pies from a member that has a cake shop here and that was really good. We even managed somehow to find some whipped cream and got that too. Then at night we had appointments with investigators, so when we were walking back home we were trying to decide if we were going to cook beans and eggs for our Thanksgiving dinner but we decided that was too boring so we were going to buy big macs. But then we called McDonalds (which actually does delivery here like if you order pizza in the states) and they told us it was too late to do orders. So we had to settle and get some Whoppers from BK. No turkey dinner, but still, better than beans and eggs.

Our gringo investigator came to church again on Sunday. Its strange because the guy really does not speak any Spanish. I don't know how or why you would want to come especially to this place if you have never been here and you dont speak spanish, but nonetheless he is here. In church we had a national wide conference and Elder Falabella, Elder Scott, and President Eyering did a broadcast that was just for Guatemala. It was really really awesome. It was a little lame that our investigator didnt understand any of it but still, I really really enjoyed it. They talked a lot about the trap of conformism and also the proper respect that should be shown to women. Not something I had thought would be the topic but I really really like all the talks. Its cool too that Elder Scott gives his talks in Spanish. He translates his own talks too in the conference.

Well, this is my last full week, and that is really weird to think. Its been really fun here in this area, I have really liked it. Its will be sad to start the farewell tour (not really planning on doing that actually). But I love you guys and hope that all is well. Talk to you next week.
Love,
Adam
Posted by Adam Morrow at 3:03 PM No comments: