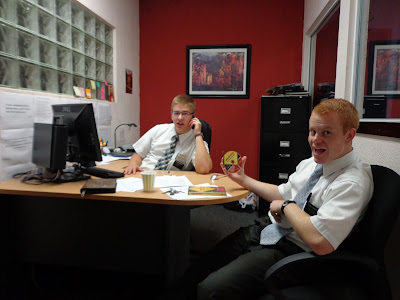 This is my office.


Things are good here in the office. We had changes this week here in the office. My last comp finished his mission and so I am now with Elder F. He is going to be the replacement of the wife of the senior couple that is here in the office. He is from Mesa, Arizona and I love him. He is a huge breathe of fresh air.  He hit a year this week and so did one of the other secretaries, so we all went out and dropped some pretty  big bucks at a steak house haha. He was at BYU before the mission so that is our preferred topic of conversation. He lived at King Henry so we never met or anything.

The work is always good here in the office though. I didn't have any more botched checks so I can be grateful for that. The banks here are so nit picky sometimes. Other than that though it's just computer work and sitting on my fat bum. I am afraid that I am going to go home like such a fatty if I die here in the office. One cool thing about my comp too is we have been waking up early in the mornings and we go running. It's weird to see the city all still asleep. There are a few people up and going but before six most people are still at home sleeping. I like it because we can go in centro park and stuff and there is just nobody. Plus I don't feel like such a fat lard all day.

We set up a lunch calendar with the members because I was sick of buying lunch after a few days. We have had some really really good lunches with the members here. It's cool because there are a lot of people here in our ward that are from other countries and they always like to cook us stuff from their country. Our bishop's wife is from El Salvador and she made us some really, really good papusas the other day. Remember the papusa restaurant in Provo? It blew that place out of the water.

Another cool thing that happened here in Xela was the volcano erupted this week. Not the one that you can see from Xela, that one is dormant, but there is a little one on the backside of the volcano that is active, and it erupted and there was a little earthquake and a huge mushroom cloud. I actually didn't feel the earthquake, we were just out walking and when your out moving you usually dont feel them. I remember at first when there was a tremble or something it would totally freak me out, like I couldnt sleep well or anything, but now it's so normal, I haven't felt one or noticed one in a really long time. I remember last year right before the big earthquake, there were lots of small ones leading up to it, especially at night. But I haven't felt one since about then. Some small ones every now and then but I usually don't even notice. Plus I feel like the office building we work in since it is so big and new, it probably is a little more earthquake proof than most buildings here in Xela. The IT guys came in though and vacuumed out all our computers and stuff, they say that when the volcano erupts there is a lot of unseen ash and dust that gets everywhere and is really really bad for computers.

Another thing, I am out of personal money=/ sorry haha. I had to make some personal expenditures this week so my card is basically out of money. I don't need more right now, but just in case of an emergency or something it would be nice to have just a little bit of money. Sorry to be such a black whole there, I am trying to keep it down to a minimum. Also, I finished the Book of Mormon again in Spanish yesterday. My goal is to read it all the way through ten times during my mission, so I have a couple more times to go in these last months.

I miss you all. I love you, tell everyone hi for me.
Love,
Adam
Posted by Adam Morrow at 4:03 PM