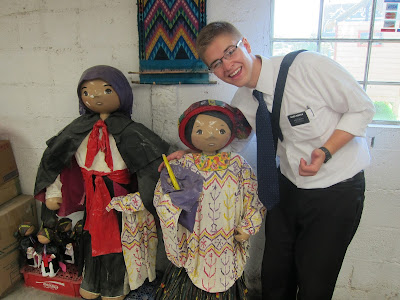 Well, looks like nobody got the memo that I would be writing on Saturday from now on ha-ha. I just had an email from you and from dad in my inbox. Things are good here in the office. I do have a comp, he is the old Retention Secretary, but his replacement came this week, so he is just kind of hanging out with me with nothing to do. He goes home this next week; he hit his two-year mark today actually. He is a really good kid though; he is a pretty good friend of mine actually. His name is Elder L, and is from Honduras. Super smart though, he speaks perfect English. My new comp that is coming in on the changes is going to be a gringo too. I like him a lot also. I am in the middle of Xela. My area is called Los Arcos, it’s where the APs where for years, but they just switched to another ward and so now I am here. This is actually my fourth area in Xela. My first area in Xela was Garibaldi, which is the neighbor area of where I am at right now. I really, really like my area though. It’s the oldest ward in Guate that is outside of the capital. Xela is the second biggest city here in Guate and its cool because I am right in the middle of downtown. The office and mission home are all in my area.

This link is actually really cool, this lady is in my ward, and all the shots from the video are from my area. So this will give you a good idea of what my life is like here. It's definitely one of the nicest parts of my mission. The one thing that is kind of lame here though, is our house. It was seriously made for hobbits. They had some other Elders look for it, and apparently they weren’t having much luck, so the first one they could find that was actually in our price range, they chose. It’s so small! I can’t even walk around standing up straight. I have to hunch to walk around in the house. And the showerhead is even worse; it honestly shoots out water below my shoulders. I was thinking about buying a little plastic stool and throwing that in the shower and sitting down while I was showering. I had to take out a few of the light bulbs in the roof because I don’t want to break them on accident with my head. Also, the house only has one window, and outside that window, is our neighbor’s geese pen. This honestly is not an exaggeration or anything; there are at least 20 geese that live outside that window. They start doing their weird geese yell at like five in the morning every day too. It’s comical actually every day when we go home, like I can’t believe how crappy of a house it is. We had some members find us a new one though and we have already got it approved and all, just we don’t move in until next month. We live right next to the APs too so that is a bonus; they have a washer and dryer in their house so I was able to do my own laundry today for the first time since the MTC. Hopefully this will stop me loosing all my clothes before I get home. When you have to pay someone else to wash your clothes they always loose socks and shirts.

As for life in the office, it's all right I guess. Obviously it's a little boring and tedious, but I never had realized all the background work the people in the office do for the benefit of all the other missionaries. I am also not the only new one. They called a new Retention Secretary too, Elder P (we always call him Piña, which is pineapple) and he is comps with Elder M, a really cool kid from Northern Utah who is the General Secretary. I am the oldest one here in the office though (after my comp goes home next week). The senior companions are really fun too, it's like I get to hang out with Grandpa Frank all day every day. It's sweet. He bought me a huge tray of cookies yesterday from the Mennonite Bake Shop people here. Oh my sweet heaven. The only thing is his wife who is here with him, isn’t doing so hot. They have like four weeks left in their mission, but she is having some bad knee problems where she had had an operation, and they might be going home sooner than planned.

I am in charge of all the finances for everyone. I have to deal with all the credit cards of all the missionaries and all the payments that the mission makes. Also I have to go to the bank (car privileges!) and do all the deposits and checks and stuff. Plus all the finances for the APs and President. There are times when there is a lot of work to do, and other times when I finish it and then I have like three hours where I just sit here chewing on my pen. We are here from 9 till 6 every day with one hour for lunch. The Secretaries before just bought lunch everyday, but I don’t really want to do that. On Sunday I am going to see if I can work out a lunch schedule with the members so that we can eat with them. There is only Wendy’s and McDonalds here in Xela, and I am already sick of them both after a week, so hopefully I can get something worked out.

P-days here are a little more free too. We don’t really have anything planned. I just need to finish washing my clothes and my comp wanted to go get Arabic food for lunch (not sure how I feel about that). But this morning we went to this cool place. It's a little Corte person doll factory. My comp got some from his old areas. They are little dolls of all the different Cortes in the country. Like all the towns have their specific styles and colors of Cortes, and this store had them all. I will be sure and buy some too when I am a little closer to coming home. Either way, the pictures are cool.  I am sure I will be getting packages a little bit faster now since I am in the office, but I didn’t get anything this week from Grandma. Maybe next week.

That’s about it though; I am going to get home like a fat bum.
I love you guys and hope you have a great week. 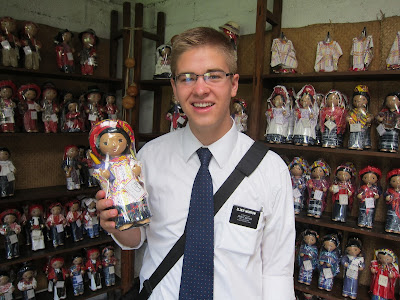 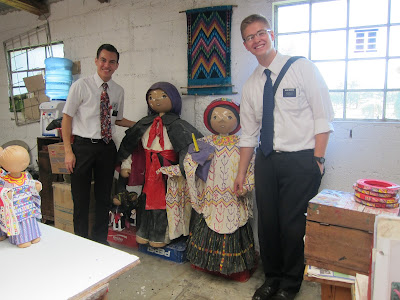 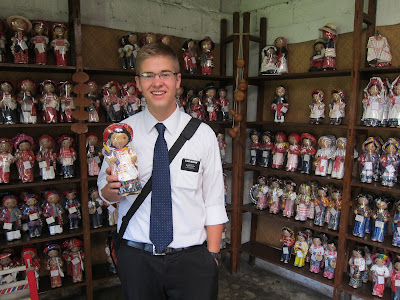 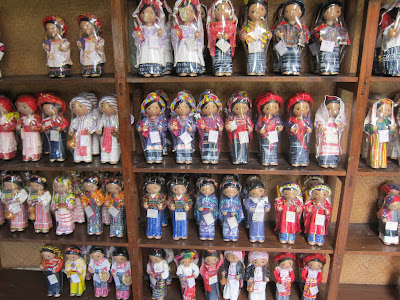