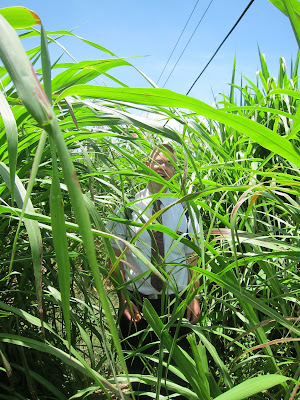 Sounds like things are good there. The spitting activity sounds great ha-ha. I can just imagine Dad laying into some kid for not having a seed. Classic Phil. I feel you with the heat and monsoon weather. The rain has died down a little bit here, but the sun has been absolutely crazy. I don’t know if it's because we're closer to the equator and also up high in the mountains, but the sun here literally itches your skin. It’s so strong that your arms and neck and face just feel like this prickle all day. And then at nighttime the rain sets in and gets you nice and soaked. I had to buy a new umbrella because of some hurricane like winds and rain a few days ago. My boots are still holding up good, plus the pair of timberland shoes I have are pretty waterproof.

Tonight we are going to work with President Bautista. I always like that a lot. He usually works with the zonies once a change but this will be the first time I have gone out with him in this area. I always really like it because before hand we always do an hour of companionship study with him, and that’s always fun. We have a few appointments with some investigators but we don’t really have any great investigators right now so hopefully it will go well. I have been thinking this might be my last change as a zone leader so I will have to enjoy the time with President while I can.

This week we had two pretty exciting things happen. The first was we had a drunk guy kick us out of his house with a monkey wrench. It was a less active and when he answered the door you could tell (and smell) that he was obviously pretty hammered. But he insisted that we come in so we went in and were talking to him for a bit. When we realized he was too drunk to know what he was saying, we tried to leave and he kind of stumbled to the door. We said a prayer real quick with him to finish the lesson and then we started to walk to the front patio. There is a front door and then a little gated patio and while we were standing in the patio, my comp kept telling the guy to bring out his liquor and we could pour it all out for him, but he wasn’t really responding at all. After three or four times of telling him to bring it out, he finally agrees and walks into his house again. We could hear him start moving around his bed or a cupboard or something and I was just thinking to my self is this guy really going to do this? But then all of the sudden my comp tells me to run, so I look around the corner into the door and the drunk guy is stumbling towards us with this giant monkey wrench ha-ha. Obviously he was too drunk to have been able to do some damage, but regardless we knew that was the time to get out of there. So we left and I look back, the guy is just standing there with the wrench and a confused look on his face. Not sure if he was going to try and hit us with the wrench, or if he wanted my comp to get rid of it for him. Either way I was just kind of in disbelief and laughing to myself. He called me again yesterday and asked me if we could go and walk him home, he said he was outside lost and drunk and he wanted us to come get him. I just told him we were busy eating lunch and he said that he understood and told us to come pass by his house later. Uhhhh no thanks. Drunk people ha-ha.

The other thing that was pretty funny, was yesterday when we went to church, my comp and another priest were up ready to bless the sacrament, and when the hymn starts they go to break the bread and...no bread. They panicky whisper to the Bishop that there was no bread and the Bishop really loudly says "how can there not be bread"? So some members in the congregation notice and two run out really quickly to a store and bought some bread like items. My comp was just sitting up on the stand dying laughing the whole time, even through the prayers and all he was struggling. Just because he was laughing too I couldn’t help but laugh. It was like a three-stooge moment or something. Just good Guatemalan chaos. The good thing too was our three investigators didn’t show up until after the sacrament, so they didn’t get to see the whole fiasco.

Either way, life goes on. Things are good here. I had to buy a new backpack this week so that is the expense on my card. I also pulled out the money Grandma told me she was going to deposit. The rest of my stuff seems to be holding up well.

Anyways, I love you guys; hope you all have a good week.
Adam