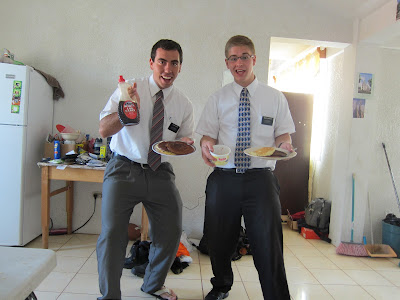 How's it going? Things are good here. I had changes again this week. My new area is Centro in the zone Zaculeau ( zac u lay oh) in Hue Hue again. I’m still a zone leader here, and my new comps name is Elder O. He is from Sacramento and is a really cool guy. We had pancake Friday and were going to do breakfast burrito p-days. He was playing football in college I think and he loves sports. The only bummer is he’s a Ute fan. Gross. He has like 13 or 14 months in the mission.

Huehue is good but it is soooo crazy hot here right now. I thought my last area was hot, this one just feels like I'm in Phoenix in the middle of July. We leave the house in the morning and my shirt is soaking wet until we get home and night. My area is really different than all the rest of my areas though. We're in the middle of the city but it's way different then being in the middle of the city in Xela. In Xela everything is soooo cramped. Like the lifestyle is like that, all packed in like sardines. But here it's really nice. Parts of it even kind of remind me of Albuquerque. It’s bigger and the houses have yards and things like that. The other weird thing about this are that I haven’t had in any other area is that the roads are paved. They are either concrete or paved, most of my areas have had these weird cobblestone kind of roads. I just wrote that and realized how weird that sounds that I’m freaking out about having real roads, but trust me, it’s a huge bonus. The cobblestone roads are always uneven and you’re always stumbling and tripping over things. Luxury here in Huehue.

We had a really good week. We have three people with baptismal dates that were set this week. We have a guy who is supposed to get baptized Saturday. The dude is super super ready and loves the church and all. He is a dancer or choreographer or something, and the YSA in the ward here wanted to learn a dance so they hired this guy for that. He came and met everyone and became good friends with the ward and they converted the guy. It was great because the members did pretty much all the hard work and we just have to teach him the lessons and show him where the font is. Love baptisms like that where the members help us out. We teach him and he already knows most of the lessons and stuff. We're planning on buying him a preach my gospel for his baptism gift. That would be so cool to have a convert go and be a missionary, bucket list.

Our house here is pretty cool. We live with this really rich Mexican member who only talks to us in "tu" (which is really weird for members to talk to us in tu). He has two houses but they are on the same lot and we just live in his guesthouse you could say. It's really nice. We have this study area which is up on the second floor, but it doesn’t have any stairs in the house though, we just have this rickety old ladder we have to climb up to get there. Always makes me kind of laugh, a fireman pole would be really cool to have though in order to get down.

Anyways, I love you all; I have to go play some basketball. Gringo Zonies.
Have a good week.