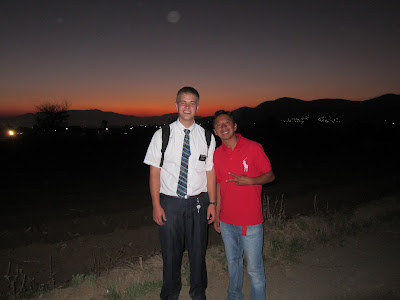 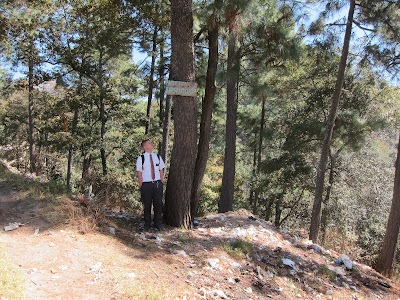 Hey Mom,
So this week was interesting. We had multi-zone conferences with Elder Martino. He is the President over the Central America area. It was really cool, and since we're the Zonies he talked with us a bunch and did practices and stuff with us. It was so crazy, he is from Texas, but since he got called as the CA Area President he lives in the Capital here in Guate now. When I told him where I was from he was like Oh, you must know Perry Webb then. I was just kind of like uhhh...He's from my home ward. He said they had served as area 70s for a long time together. Pretty cool. We also had just a Zonie conference with him on Friday; it was pretty impressive just to say the least.

Friday wasn’t my finest day in the mission though. Actually Friday wasn’t that bad, but from what happened on Friday has brought serious consequences. In the night we went and visited some less active members in this little pueblo that’s really far away. We actually go there quite a bit because it’s a really cool little area. All the people there live in adobe houses and are crazy poor. Also they don’t have running water there, they usually all get their water out of wells. So we went and visited this lady and she gave us this weird wheat drink when we were leaving. But like I said, it's well water. And they usually boil it and kill all the bad stuff so we don’t die, but this time she didn’t. She was really angry with us because we didn’t go and visit her son who was in the hospital because he had fallen and broken his arm. We would have gone, but she hadn’t gone to church in like 2 or 3 weeks, so we hadn’t seen her, and she didn’t call anyone and tell people that her son was in the hospital. So we were just like uhhh.... how where we supposed to know? She was just super angry and kept telling us we have to know these things as missionaries (elder=psychic), and that she was too embarrassed to call and tell anyone. Yeah we were just kind of shaking our heads, but either way, she was so mad we couldn’t say no to the lukewarm wheat drink. The next day my comp and I were not feeling so hot. So like noon on Saturday I just plop down on my bed and don’t move for like 10 hours. I was just in kind of this like fever coma. My comp just had boo on Saturday and then he was fine. But yesterday I was even worse. I just had crazy body aches and chills and a fever. Then I finished off all of the purified water we had in the house. We like camped outside the little store in front of our house this morning and bought like ten Gatorades and more purified water. I was toast though ha-ha.

I’m better today. We went into Xela and saw the nurse this morning, she gave me some antibiotics and the war is now on. I literally can feel the fight. I have some pretty normal bacterial infection, but she said that this medicine would clear me up in a few days. That will be nice ha-ha. This is really the first time I have been down and out in the mission. I couldn’t make it to church yesterday, we had a member come stay with me while me comp went with another member. I feel like I know a little more of what pops experienced in his mission though. Ha-ha. Hopefully it’s the last time.

Anyways, that’s pretty scary about Liv. That probably would be something that needs to be checked out fairly well. Just tell her when it happens though, a lot of it is all mental, like if she just calms down and relaxes, it will pass a lot quicker. That’s what always happened with me. Well, not that that has exactly happened to me, but that was always what helped me.

So Groundhog Day also passed. That’s still a real holiday? I honestly don’t even know what that means if he sees his shadow or not. The Lance thing gave me a good chuckle too. Sometimes I wonder if pops tries to be Phil Dunphy, or if it really just comes that naturally.

Anyways, I love you guys, have a good week.
Adam
Posted by Adam Morrow at 2:31 PM