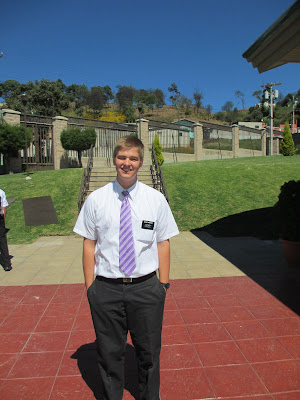 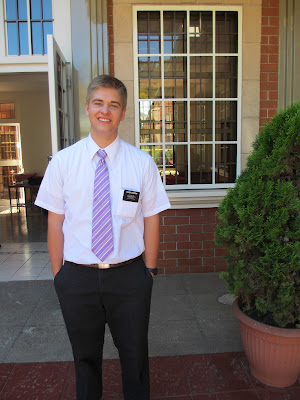 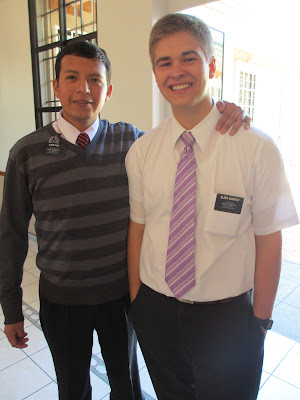 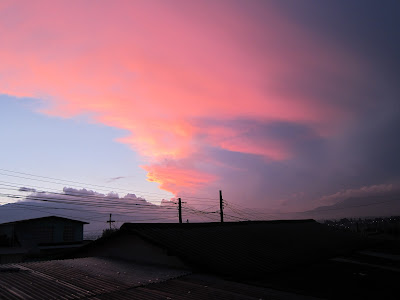 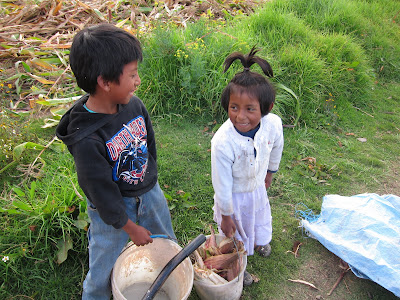 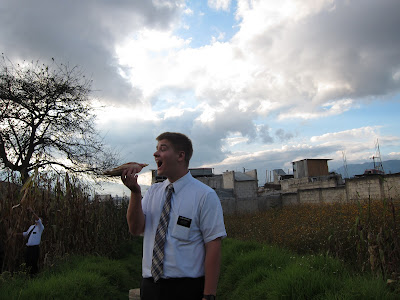 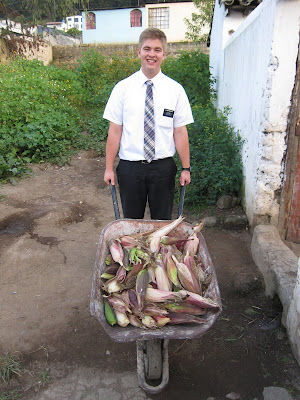 So yeah, I survived my first earthquake. It was honestly the craziest 52 seconds of my life. Because we are in training there is this program that all the trainers do where we have two hours of comp study, so we were just sitting in our house and reading and all of a sudden it just started to rumble a little bit. My comp was kind of like oh, tremble (a temblor or tremble is anything below 6 on the Rector scale, anything above a 6 is an earthquake, from what I've heard) and then it just started to rumble harder and harder and just kind of a sickening sound came from the house like it was going to fall. So we ran out into the street. We just stood out in the street for another 30 seconds or so and then it stopped.

It was actually kind of a surreal feeling, like I didn’t really realize what was going on until after the whole thing. The ground was moving kind of like wavy, strange. But honestly nothing happened to our house or anyone in our area. Actually an old shoe did fall down off of one of our cupboards. Where I live all the houses are really strong and so there would need to be an earthquake in the 8s or so to do damage.

And then yesterday, the last earthquake, we were outside with that family of converts we are always with. And it wasn’t as strong but it was a little bit longer than the one that happened Wednesday. The ground didn’t rumble. It just felt like everything was a little bit tipsy. It really didn’t affect many people in my mission, a few houses made of adobe fell but very few people were killed. All of the damage happened in this place called San Marcos, which is in the Rheu mission. But the majority of the fatalities, and houses that were destroyed were there. Y'all really don’t have to worry about us here. They always say it's way safer here in Xela compared to all the other missions here in Guate, it's a lot more progressed and the buildings are better. Plus it's a lot more inland so were completely safe from tsunamis and things like that too.

Another thing that happened this week, the story of my comps ocd continues. He had been complaining for a few weeks now about our refrigerator was dirty. So one day he decided to clean it and he took it outside and started chipping away at the giant ice block of the freezer part of our mini fridge. I don’t know how, but he broke the tube part that circulates the carbon monoxide that keeps it cold. So he broke our fridge, this was  Tuesday, so we have been going all week without a fridge. I have been dying since I have been holding firm to my Chocó crisps cereal diet since I got here. But it's pretty hard to eat cold cereal without milk. We're still waiting for the office elders to bring us our new one too. I have been calling them every night and they are like, sorry, maybe tomorrow. They’ll probably just bring a new one in a few months or so, not a big deal.

Today was kind of interesting, the ZLs called me last night and told me that pres had assigned my district and another district to go and do some service today. So we're actually going to have p-day tomorrow we're just writing today. But we went and helped them set up a dental clinic in one of the church buildings here. All the kids that are from this mission getting ready to go on a mission, they are going to bring them all here and get all their dental work out of the way so they can send their papers. Just from Xela they are planning on 70 kids. That’s a lot of wisdom teeth to take out. But the interesting thing is the dentist that was there in charge of it all was talking to me, and he told me that he lives right by the MTC, so I told him that’s where your parents live and they were like oh, yeah we know the Maglebys. They are in the same ward as grandpa and grams. Kind of funny right? They were super excited and took some pictures of me and stuff. Small world.

Anyways, don’t worry about me, everything is good here, I knew you guys might have been freaking out so I asked Lari to do me that little favor. She is actually an English teacher, so I would guess she probably has pretty good English. She only speaks to me in Spanish though. As for the packages, I got Heathers, and one from grandma Mag and also grandma Morrow, so yeah I am pretty packaged out right now. As for Christmas though (don’t know if your planning on sending a b-day and Christmas one?) but if you are sending a Christmas one I do have a request, remember that swatch watch I bought, the purple one? I broke it, it was kind of a freak accident really, but I would love another one of those, that was like my favorite watch ever. Just one of the really plain ones, but send a cool color too. I remember my old roommate had a dark red one that was the same kind, I really liked that, maybe if you can still order those? That would be greatly appreciated on my part. You can buy watches here but they all are really cheap and break in like a few weeks or the battery dies, just not very good quality.

Anyways, you guys have a good week, bummer about Romney too right, but did y'all see the First Presidencies statement on that? Our church is so cool.
Adam
Posted by Adam Morrow at 4:58 PM