Here is a link to a youtube video of Adam's new area. It is about 5 min long but shows some really cool  stuff. This isn't a video that Adam took, by the way.
http://youtu.be/Tti3hkTGZ_Q 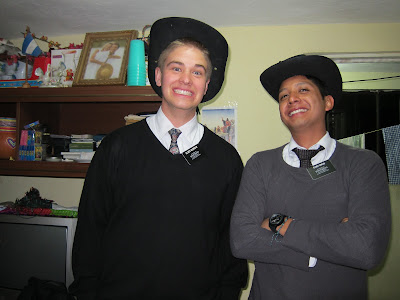 Yeah I didn’t tell y'all my changes last week because I didn’t know where I was going. I just knew my comp was training so just by default I knew that I was out. My new area is called San Cristóbal, it’s one of the departments of Totonicapan. I’m a zone leader now. My comps name is Elder Chicas (yeah his name is Elder Girls), he has about 16 months in the mission and this is his fifth change here. He is from the Capital here in Guate, Zona 18, which is infamous for being the most dangerous part of all of Guatemala. Whenever he tells people where he is from the people just ask him if he is part of the Mara 18, which is the most dangerous gang in Guate, he just laughs and says no. The ironic thing is the colony where all of the Mara 18 are is called Paradise.

Things are really good here in the area. It’s super big which is really nice. San Cris is actually a pretty big city, and it has a ton of little aldeas that surround it and it’s all part of our area. All I know is I cannot pronounce any of the areas names because they are all these crazy indigenous names like Pacanoc and Xaconacon and weird things like that. We share the area with sisters too.

As for all the packages since I always forget, I did get all the birthday ones people sent me. I just got them all last Monday right before I had changes so I had to pack what I could and eat the rest that night ha-ha. I left a little bit of candy for my kid and my new grandson. Speaking of my grandson, I heard through the grapevine his last name is Farley; maybe he is related to those we know?

As for the investigator who got his wisdom teeth out ha-ha, I can believe it. It was seriously pure chaos. Just imagine hundreds of teenage kids doing all their work, medical and dental all in one day. Especially since they did like three different stakes every day. There were no return visits.

This week was really cool; we had a meeting for all the zonies with Elder Martino. He is the president of the area for all of Central America. He talked to us for like three hours, it was insane. The guy is an American, but he served his mission here in Guate and was even in Huehue at some point in his mission. It was crazy how well he could speak Spanish; I was seriously blown away. But he talked a lot about the Atonement and all, it was so good, it was like being in general conference.

The other thing that happened this week that was pretty interesting, I have no idea why they do this, but last Friday, Saturday, and this coming Tuesday and Wednesday, people here in San Cris dress up as devils, and run around and bug people. It’s some tradition that has gone on for years and years here so its kind of a big deal. They are so weird though; they just wear Speedos and devil masks, and paint all of their bodies and then just run around and pinch people. Like seriously that’s all they do. When people were explaining it to me I was just kind of thinking to myself...so they just paint up, get in a Speedo, and run around...pinching people? That’s it? But yeah, just another one of those holidays where I just kind of scratch my head and think...ok Guate, just do what you have to do I guess.

One of the cool things about this zone though is it’s where they make the major part of the Corte (the material the women use to make their clothes) in this country and it’s really cheap. I have already bought a couple ties and am planning on getting some more made. It’s actually really cool as a tie.

The Ward Christmas party sounded cool. I didn’t get any of the photos you were talking about though; don’t know what happened there. I am not really sure what’s going on here for Christmas. We aren’t going to do things as a mission, just as zones, but we’re in one of the most rural zones and there is not really anything cool or fun to do here. We’ll probably just eat and watch Mr. Kruger’s Christmas. Maybe not even that. I have been trying to find that movie and haven’t had any luck, maybe we’ll just substitute for the Restoration again instead. I sent y'alls package for Christmas last week, so when you get a package from me don’t open it, because I didn’t wrap any of the gifts. Even if I could have found some wrapping paper I don’t think I could have managed wrapping every little thing.

Heather told me Ann got her call to Morristown, NJ, that is pretty legit. Maybe she’ll get called to serve in Chatham. Is it just me or are all of the missionaries from the states that are getting their calls now just staying in the states? I haven’t heard of one person that is going foreign since they changed the age requirements.

(We are not sure what happened but that was the end of his letter this week.)
Posted by Adam Morrow at 4:47 PM